I make it in two steps. First, make the curry. Then let the curry sit overnight and become even yummier. (Pro Tip – a curry always tastes yummier the next day). And then use it to make Biryani. You can always use the remaining curry for another meal.

How to make the curry – I use a whole chicken cut up into curry sized pieces (Yes the butcher gets that terminology). Bone in is preferred for Biryani.

In a heavy base pan and add some oil, and sliced onions. Cook the onions until they turn pinkish brownish. Add the marinated chicken and cook until the liquid starts to bubble up. You want this entire liquid to reduce so cook on medium with a lid on for some time. This will keep the chicken moist. You are to judge when the chicken is cooked. You don’t want it overcooked.

Cook 2 cups of rice. I basically let it cook in the rice cooker and take it out 3-4min early.
Take some saffron and add it to warm milk (1/4 cup) and keep it ready
Slice onions really thin put them on a baking sheet, sprinkle some oil on them, and broil them at H1 for 30-45 minutes. They should turn golden (not black).
(You can also use friend onions from Trader Joes and just roast it in a pan with some raisins and almond slices)

Now take an earthen pot, and brush it with oil inside.
Start with adding a layer of chicken curry followed by a layer of rice, followed by some fried onion and raisins and splash tbsp of the saffron milk.

Serve HOT and steaming with Raita 🙂

What a historic moment! Today Hillary Clinton won the DNC nomination and has become the first woman to have ever secured a nomination to the US Presidential election. Congratulations Hillary. Well deserved. I don’t have to agree with all of your policies, but I sure am proud of you and your efforts.

To me Hillary is a very strong woman. A woman who exudes power even before she has attained it. A woman who carefully picks her words, her people, and her passions. She is smart, witty and empathetic.

Around this time, eight years ago, she lost against Barack Obama. And ever since that loss she has not left any stone unturned to secure this nomination. She built her resume, acquired new skills, achieved more accolades and learnt a few more tricks on how to fight this battle. Little did she know eight years ago who she’d be competing against, so she built a well rounded resume. From foreign policy to taxes she has her bases covered. And not once has she seemed ambiguous or contradicted herself. She earned the money, raised even more, and she got her team together and pursued this goal with single minded devotion for last eight years.

History will be made again when she is elected to be the President of this country. But there is another post to be written on that day. Today, we celebrate a woman’s persistence, perseverance and her grit, to follow her dream and achieve the goal she had set out for herself.

Through my words, I am celebrating a woman’s journey. A woman who has set an example for a lot of us, that failure is an opportunity to learn what’s missing, and acquire the skills as you march ahead. She has reminded us that some journeys take longer than others, but you need to stick to the game and firm up your plan. She has taught us to be graceful and calm as we follow our plan. She has taught us to not give up and always have your chin up. The ebbs and tides are part of the game. If you have a goal in sight that is worth your efforts, just go grab that bull by its horns and power through.

She has taught us how to follow a dream and make it a reality. Through hardwork, and dedication, sickness and drama, assaults and scandals, she has shined through.

Congratulations Hillary! Well done.. Go finish this race!
Note – If Hillary was a Republican, I’d still write the same post.
I haven’t been writing much. There are several reasons for it. One of them being that I am finding it extremely hard to settle back in my routine after returning from India. There is just so much to do and so less time. And I am struggling to stay awake past 9pm. I try, and I wake up so tired.

But another reason I am not writing is because I am just very annoyed with the way things are around me. Not at a personal level. But at a larger scale. I am seeking solace and peace in my little family and our close friends. I don’t feel like commenting on what’s happening around me. There is just so much nonsense all around that I am choosing to just ignore it. And live selfish for a while.

But just like everything else, I need to write it down to get it out of my system and cleanse. So I will do that and I am not looking for any commentary or rebuttals. I have my views and I am sharing them. No one needs to agree with it.

And last but not the least. Why have all these problems piled up on my plate at the same time?
I will try to be more positive now that I have let it out. But it is a steep climb.
Today is the day of confession.

Many of my friends, relatives, and peers  often read snippets from my life and tell me that I should write. I should write a cookbook, a mommy book, a children’s book, a book about my father, and maybe another one about my observations from the streets. And I smile, like their comment, and hide behind a truth that I have known for almost 25 years. I am lazy.

I have a lot of ideas. But I don’t put them into action. The only ideas that I put into action with all my fervor and passion are those related to cooking. Cooking is the only thing I have pursued with all my love for the past ten years. I have also been writing for the same length, but my writing ideas never bear any fruit. And the reason for that is the cooking is a quick reward game. But writing is not. Writing is a laborious game. You write, edit, pitch, fail, and start again, until you find an editor interested in your work.

Cooking gives me instant rewards. A yummy lamb chop curry that I imagined on Friday, and put into works over the weekend, was gobbled up in a day. Agam’s appreciation – instant. My gratification – instant. I have no dependencies. It is a self-sustained ecosystem. Writing is not like that. It needs more time and more commitment. And I have always just given up on my writing goals since I am lazy.

Additionally, I suffer from a major impostor’s syndrome when it comes to writing. And somehow that is not the case with cooking. I actually have enough confidence in my cooking skills that I can compete for Master Chef competitions if I find the time to train. But even writing for Nanowrimo becomes a challenge for me. I take too much time wondering if my content is worth it. The ‘it’ here being the reader’s time. Murakami’s words make me “feel” every emotion his characters feel. My words don’t make me “feel”, let alone make others feel.

But I don’t give up completely. I keep writing these blog posts. And for me, they are enough. Maybe I am selling myself short. Maybe I am full of myself. I don’t know which one it is. But I know, and I confess that I am lazy. And that is the only thing between me and the first draft of my first book. 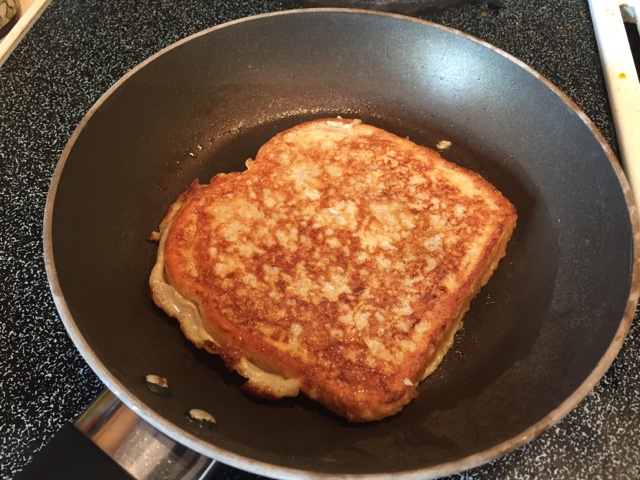 Well here is what I did –

1 egg
1 slice of bread
Dash of cinnamon
2 tsp sugar
1 tbsp agave nectar
1/2 tbsp ghee/butter
1tsp vanilla extract
Mix egg, cinnamon, sugar and agave and dip bread in it. Heat the skillet at high and add ghee to it. Bring it down to medium now and place the dipped bread on the slillet. 2-3 min on each side … keep checking to see it is not turning too brown. And that’s it. The magic is in sugar and the butter/ghee.
C suggested using panettone bread next time. It sounds so delicious – got to try it! 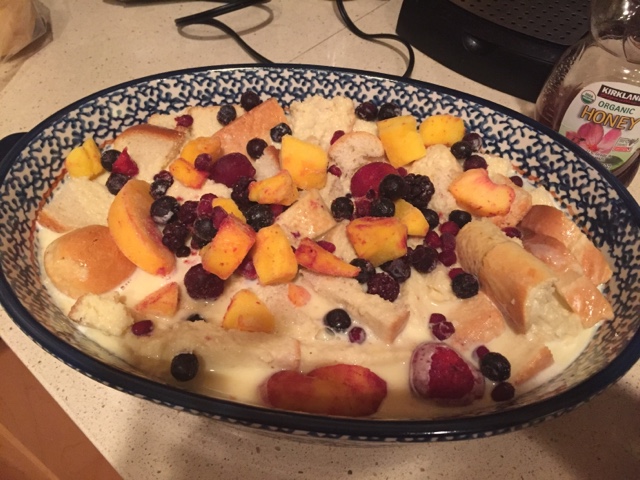 This is in the fridge right now. Will bake it tomorrow morning.
2 cups milk
6 eggs
1/3 cup brown sugar
2 tsp vanilla essence
Bread – baguette is preferable
1 banana – pureed (basically it’s my way to sweeten it)
Fresh cut fruits ( Tartine does not bake their pudding with the fruit. But I was being lazy and threw it all in.)
Will bake this tomorrow at 350 for 30ish minutes.

Meal plan said shrimp curry for tonight. When I opened the packet of shrimps, they didn’t seem enough. And so I created this recipe. I always keep a curry masala ready (onion, tomato, garlic, ginger, while spices all sautéed and pureed). So this came together really fast. It was also pretty tasty.

Curry masala – 4 tbsp
1 cup coconut
2 cups methi
20-25 shrimps
Heat Oil
Temper it with mustard seeds and curry leaves with red chili whole and a green chili
Add curry masala
Saute until it starts to leave oil
Add coconut. Cook for 3-5minutes
Thaw the methi if you are using frozen
Add it to the pan and cook with coconut till the water evaporates
Add some garam masala and salt
Finally add shrimp and turn the gas off.
Serve with rice 🙂