Alaska – the Great Land. No that is not my compliment to Alaska. It is the literal translation of the word itself. And very seldom does one find the name of state as befitting as this one. Alaska is a great land of wonderful people, breathtaking landscapes, awe-inspiring peaks and of course amazing wild life.
My interest in Alaska spiked way back in 2009 when I moved to California. I was an avid Kayak.com user and the website had come up with a brand new way to explore travel destinations. They even called it Explore. The feature prompts you to set a base airport and then shows you travel fares to destinations across the United States. It was then that I realized that I was now much closer to the northernmost frontier of the US — both in miles and the $$ required to get there.

I don’t like long flights. And hence I like my vacations to be at most five hours away. Anything longer than that is not worth it, unless I plan to spend over a week there. Yeah I am much older now and hence my travel tastes have changed. It was only in 2009 that Agam and I did a 21 day trip to 6 countries in Europe. I don’t think I can do that type of travel anymore. In fact it was during our Paris trip that we realized that to really enjoy and dive deep into a city you need at least four days there, and that is excluding the travel days. And ever since Paris we have reduced the number of vacations, but increased the duration of our stay. But there are exceptions. London was too big to cover in the six days we were there. So there will always be some place that won’t fit the pattern. But in general we are now older and need some time to settle in. We like to go deeper than just touching the surface and we like at least one day when each of us just does our own thing. With all these criteria in mind I planned our Alaskan trip in 2013. It was a twenty day itinerary that was going to take us to Anchorage, Denali, Seward and Homer. All tickets were booked by February and we were all set for our adventure. But, in April my Mum’s travel plans to the US got finalized and we decided to drop our Alaskan odyssey. Instead, we decided to go to Maui with her.
But when I set my mind to something, I just have to make it happen (just like everyone else), and hence I decided that we again plan Alaska for 2014. This time around I changed the itinerary a bit, something was telling me that it would be a while before I would be able to come back and do a similar trip again, and so I charted the following itinerary. Note that this is a shorter version of a longer travelogue that I do intend to write very soon. 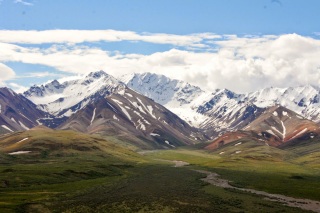 On Friday night we flew into Anchorage, rented a car and spent a night close to the airport. The next day we drove to Denali with frequent stops and made it there by early evening. It is a four hour drive. You can stop by at the Denali State Park and you must stop at Talkeetna and enjoy the cute little town. That night we walked in the area, settled in, enjoyed our cabin and explored local eateries. We stayed at Denali Cabins that were nine miles from the park entrance. There are a lot of options even close to the park, but we were on a budget and hence picked these cabins. For the next day, I had booked the National Park shuttle bus that took us to the Eielson Visitor Center with ample stops in between to enjoy wildlife and the landscapes of Denali National Park. There are multiple options to choose from for this tour. I picked this one because I did not want to sit on a rickety bus for an entire day and have my daughter yell at me later.
Oh this is a good time for a disclaimer. When we booked the itinerary we had no clue about our missy’s plans. And hence we had to tweak our agenda just a lil bit to make sure we don’t exhaust her.

..And so we spent the entire day in the Denali National Park and then the next day we started early for Seward, a good six hour drive from Denali. We stopped in Anchorage for lunch on the way and continued the beautiful Seward Highway drive along the water, to our cute little lodge in a town called Moose Pass. Moose Pass is midway between Seward and Anchorage. After enjoying quiet walks along the Summit Lake and a nearby State Park, we retired for the night. You can always choose to stay in Seward. I just like being far away from crowds when I am on a vacation. I deal with them enough in my professional life. 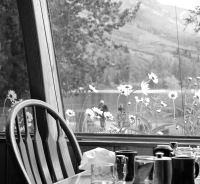 The next morning we drove another thirty miles south to get to Seward where our boat tour awaited us. Seward is the gateway to Kenai Fjord National Park. We took the boat tour to the glaciers and enjoyed the day aboard a beautiful catamaran. Again, there are many tours to pick from, but definitely go with KFT since they had the most modern boats and their crew was excellent. The next day on our drive back to Anchorage we took a 17-mile detour to a small town called Hope. If you like small towns, you will enjoy this one too. When I say small town I literally mean one coffee shop and one restaurant with a library and a church. That evening we flew to Juneau.

Our primary point of interest near Juneau was the Glacier Bay National Park. You can fly directly into Gustavus, or you can fly into Juneau and then take a four hour ferry to Gustavus. We chose the ferry. I love ferries and I did not want to spend $150 for a flight from Juneau to Gustavus. The legend is that some airlines do fly to Gustavus at a little extra cost. I discovered the legend a little late. Be careful with the ferry though. It does not run every day of the week, so plan in advance.

In Gustavus we spent two nights and enjoyed the National Park and the little town itself. We skipped the boat tour to FairPass Glacier since we decided it was too similar in nature to the Kenai Fjord Tour and we figured that our daughter would not like to spend another day on a boat. We were just cautious. And so we simply enjoyed the small town and the hospitality of our Bed and Breakfast hosts. 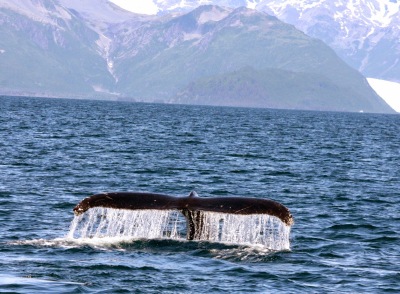 The next day we returned to Juneau and stayed two nights at the Westmark Baranof before heading back to San Jose. While in Juneau you can drive over to Douglas Island for nice hikes or go to Mendenhall Glacier.
So in short that was our itinerary for those who want to book their Alaskan adventure and are looking for a sample.  Of course more details and pictures to follow in the real travelogue 🙂
In a nutshell I highly recommend that you explore Alaska on your own and avoid the cruises. I understand that cruises work great for some demographics, but if you have the will and you really want to enjoy Alaska, then rent a car and enjoy your drive along the foothills of some of the tallest peaks you will ever witness. Don’t be afraid. The roads are well-maintained and as an added perk, they bring you in close proximity to the natural wonders of Alaska.
Alaska is more than just glaciers and if you want to connect with the natives, enjoy the local cuisines (including reindeer meat) and soak in the spirit of this great land – then accept the challenge and put on your planner hat today!