Today I found myself in a very twisted situation. I really don’t want to get into the specifics. But in a nutshell, I was tasked to rescue a small bird that had not yet learnt how to fly. I was watering the plant she was nesting in and I think the pressure of the water got to her and she decided to take a leap of faith. Just that her leap did not go that well. She crash landed on the floor and soon resumed herself and trotted her way into my garage. My first and incorrect reaction was to chase her with my water hose. But that scared her even more and she hopped around in my garage looking for a place to hide.

We all talk about survival of the fittest. But today I saw it with my own eyes. The perseverance of this little bird was quite riveting. I followed her along, moving things in my garage and clearing up corners so she finds her way towards an open area. But this missy was just too difficult to convince. I found myself calling her all sort of names from Missy to Sweetie to Birdie. As if she would hear any of those and respond. I also tried to offer her some water so I could divert her route that way. But she was convinced that I was after her life. If only she could hear me out.

I was perplexed by the situation and kept wondering how I could communicate logically with this bird. Of course I was being ridiculous. It was a bird after all. I wished that she would just listen to me once. I also went back to the planter and knocked it a couple of times. It was my attempt to call upon the mother. I wondered if I could just somehow tell the mother, “hi.. its me. your kid is in the garage and won’t live long if you don’t come out and help.” But of course the mother was also scared and refused to budge.

Finally I decided to use brute force. There was no point trying any rational methods. So I chased the little one out of the corner where she was seeking refuge and finally pinned her down to a location where she could no longer hide. I then showered some water on her so her feathers would become heavy and she would not attempt to fly when I try to hold her. I finally succeeded in my efforts and lifted her with my hands and placed her on a towel and held the four ends of the towel together as if to make a cradle. What I felt as I carried that cradle to the nest is quite something. I could feel the throbbing heartbeat of the bird. I was carrying a ‘life’ in my hands. Carefully I placed this little one back in her nest. Her mother did not even flutter. I was happy that I could bring the kid back home. Just that, that wasn’t exactly what the kid wanted.

As I emptied the towel into the planter, the little bird, opened up its wings and made her pilot dive from the planter to a trellis right across from it. She flew for the first time. I saw her flap her wings. In between this 15 second flight she got tired of flapping and I could see her almost lose control. But she made it in the end. She made it across the 15 feet width and happily perched upon the trellis. I was shocked at what I saw. She was panting heavily and her eyes were wide as a dart. I felt happy for her and left her alone.  When I returned after some time she was gone.
Afterwards I felt a little sad. It was the feeling that Pi had when the tiger left him to himself after reaching the shore. C’mmon birdie, a thank you would have been nice, I thought. But really it is me who should thank the bird. Today I learnt about the power of language. The fact that we humans can communicate with words is not to be taken for granted. As long as we can all speak a language that we can all comprehend, we can resolve any conflict. All we need to do is talk. 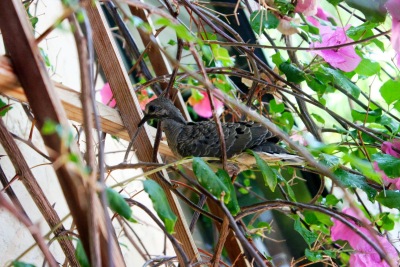 I experienced an array of emotions during this thirty minute melodrama.  If I had to draw a timeline of events, I switched roles from a murderer, to a peace corp agent trying to save the victims to being a soldier who won the war and finally an empty nester, who almost felt betrayed. But I wonder what the bird experienced. Was it fear, a sense of achievement or may be nothing? I don’t know enough about birds, but I know she was a brave one. And I am proud of her.